A Long Walk to Access Health Service:
The Plight of the Seriously Ill in Tanzanian village of Lupingu
Experiences from Lupingu village of Ludewa district in Tanzania suggest difficulties of expectant mothers, seriously ill and people living with HIV/AIDS in accessing the health services, where they have to walk two days to access health services. Majority residents opine about the gross neglect and ignorance by the people’s representatives and the failure to bring services closure to people. 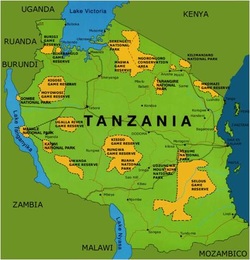 It’s been more than six months that the ambulance which catered to the patients in Lupingu village has been grounded, forcing people to walk 45km to Ludewa district hospital. Otilia Haule was fortunate to reach the Ludewa district hospital by a car to deliver her first child, as she got a lift from an NGO vehicle that was present in her village Lupingu at Iringa’s Ludewa district in Njombe Region, when she embarked upon the journey.

Expectant mothers in Lupingu, especially first time mothers are advised to visit the district hospital, 45 km away in Ludewa town, for child birth. Transportation is a big hassle, made worse by the poor road conditions.   Expectant mothers and children under five who are referred to the district hospital would get a free drop in the ambulance  to the facility until it was grounded. However, other patients needed to contribute 35,000- 40,000 shillings for the fuel.

The ambulance would also cater to medical needs of other villages located on the shores of Lake Nyasa in the Southern highlands. Now, women and patients referred to the district hospital have no other option except to embark on a 45 kilometres journey to Ludewa hospital, which takes two days.  If patients are not admitted at the hospital they have to journey back walking 45 km to the village. The gravely sick and mothers post delivery too have to take the homeward journey 45 km on foot.
Nurses at the Lupingu dispensary usually advise first time mothers and women expecting to deliver at the district hospital due to the fear of complication that is likely to happen during delivery. Two nurses at the Lupingu dispensary, Madeline Mapunda and Mary Kayombo advise women to travel the district hospital when they are 32 - 38 weeks pregnant, as the dispensary is not equipped with facilities to handle emergencies. Women who travel to the hospital within the advised period are able to reach there safely.

Few like Otilia are able get a lift from vehicle owners who are on their way to visit the village for various reasons or they get dropped in the Catholic priest’s car who visits the village once in a while. The natives cannot afford to hire the only vehicle, a Toyota Escudo, that is available  in the village, even during emergencies as the fare charged is around 10,000-150,000 shillings. This is expensive commute for the needy to afford.  Moreover, the vehicle plies to Ludewa only when it gets packed with passengers, making the wait long. Besides, the poor condition of the roads in Lupingu prevents vehicle owners from carrying transportation services as no one is ready to send their vehicles to Lupingu for transportation.

“The transport problem affects every body here. As all four nurses here have to get salaries from Ludewa, and all of us can’t go at the same time  we take turns to go to  town   for the same ,”  says Mapunda. She further adds “The exercise to get money from the bank takes nearly a week which affects services at the dispensary and when we miss the hitch in the priest’s car, it means a walk of four days to and from Ludewa”.

The first day of the journey to Ludewa ends at a village Nindi and it is here that the patients and expectant mothers from Lupingu spend the night before proceeding to Ludewa hospital.“When people reach Nindi village, they seek help for shelter and food from the residents of Nindi during the night and proceed the next morning for Ludewa” says Otilia. Victoria Kiowi, a mother of four traversed the route from hospital back to Lupingu on foot, just two days after a caesarean delivery.  She could not afford to pay 150,000 shillings and hire a car to bring her back to the village. “It’s been a long time since the dispensary ambulance was grounded.  We thus have no choice but to trek for two days to get to the district hospital at Ludewa,” says Victoria. The ambulance driver, Faraja Chipungahelo, who is now jobless comments about high maintenance of the vehicles that forces transportation players to stop plying. He  says, “Nearly 3,000,000 shillings are required to buy spare parts for the vehicle.”
According to the Village Executive Officer (VEO) , Yusuph Lukuwi, four villages in Lupingu ward are getting affected due to  the ambulance not plying.“We do not have adequate means of communicating with the outside world right now. It’s like we are in the jungle. The road is very bad and we haven’t had communication services since April. We are forced to walk to the next village even to get mobile phone network connection,” the VEO adds.

Majority of the residents in Lupingu feel neglected that they are being overlooked by representatives in the Parliament, who are not bothered to visit the people after garnering votes. The transport problem not only impacts expectant mothers and the seriously ill, but also people living with HIV/AIDS.  Victoria Haule (38), who is a mother of two, is infected with HIV/AIDS. Haule, who is a member of the Service, Health & Development for People Living Positively with HIV/AIDS (SHDEPHA+) says, “HIV positive people in the village are tired of walking long distances to Ludewa to get Anti-retroviral drugs (ARVs).” The adherence rate may drop quickly, if immediate measures are not taken to address the situation. Some people are dropping out of the treatment as a result, she laments.
Haule questions, “Why the Government can’t take services to the community.”  Patients need ARVs at the dispensary which would save the 90 kilometres journey to and from the district hospital every month. She adds,  “We face serious problems in our village. We don’t have good roads; we cannot even communicate with people outside this village unless we go to Ludewa” The government needs to consider helping us by bringing social services to this village,”.

Recognizing the problems with the ambulance service, acting District Executive Director for Ludewa, Brown Kilanga says, “The plans to repair it are underway. The vehicle needs to be thoroughly checked and this process requires a lot of money.”

Residents opine that President Jakaya Kikwete had promised to improve health services in the country including an attempt to bring services closer to people in 2009.  While speaking to the Finland President, Mary Robinson, at the state house in Dar-es- Salaam, the President had outlined that “Our goal is to improve health services, improve hospitals, dispensaries and existing health centres, build more and make sure they are within five kilometres closer to the people.”
Ludewa Member of Parliament, Deogratius Filikunjombe too had promised that the problem would end soon as the Tanzania Roads Agency (Tanroads) had agreed to upgrade the road to Lupingu.

According to Lupingu residents, the President’s promise to bring health services closer to the people is a welcome step. However, the health facilities need to be fully equipped in terms of staff and other facilities, so that people do not have to be referred to the district hospital unnecessarily. Even if people are referred to the district hospital, then transportation should not be a hindrance. Roads need to be in good condition and health workers need to be motivated to attract them to work in remote areas. Community members’ question that three years have passed and the residents of Lupingu are still waiting for the promise to be fulfilled.

Dr. Borjan Pavlovski is a medical doctor and has done his Masters of Public Health, at the Medical faculty in Skopje, Republic of Macedonia.  Dr. Pavlovski is the Program coordinator of Public health with Association for Emancipation, Solidarity and Equality of Women (ESE) in Macedonia – ESE. His interests include public health, especially focused on improvement of health status, health rights and access to health care services of marginalised groups of population, including Roma minority, especially women. Dr. Pavlovski also works for the improvement of transparency and accountability of the Government, especially in the health care sector.

To know more about the work of ESE visit  www.esem.org.mk and www.healthrights.mk