I was part of a twenty member group that had come to Guatemala to learn about the social accountability work around health that was being done by Centro de Estudios para la Equidad y Gobernanza en los Sistemas de Salud or CEGSS in the remote municipalities in the highlands of Guatemala. Over seven days we travelled across four locations meeting with members of citizen‘s councils, municipal authorities as well as health providers to learn of how members of the citizen‘s councils had started becoming more active and articulate to demand their health rights from the local authorities. The Mayan people are the original inhabitants of Guatemala, but today the communities we visited were among the most marginalised in the country. Though free health care is a constitutional right of citizens of Guatemala, the situation on the ground was very different. Most of the group that had come to see the social accountability work were from Eastern Europe (from Macedonia and Bulgaria) and they were taken aback by the lack of health care facilities; however they were also very impressed with the degree of social mobilisation among the rural Mayan communities and their collective struggle to obtain better health care services for the community. 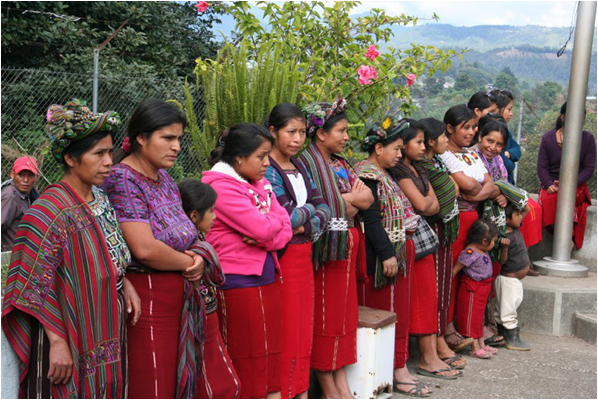 The Ministry of Public Health and Social Welfare (MSPAS) is the main provider of health services in Guatemala and this is done through mobile paramedic teams that visit communities once a month, a network of health posts staffed by paramedics, primary health care clinics with doctors and hospitals. First level care is mainly targeted towards maternal and child health and emergency care. The health problem that was mentioned to us most frequently was the lack of emergency transport for women requiring emergency obstetric care services. We were told that most births took place at home under the supervision of TBAs (Traditional Birth Attendants), however, in cases of emergency there were hardly any ambulance facilities available to transport women to the hospitals where emergency obstetric care facilities were available. In Zona Reina and Nebaj (province of Quiche) and in Ixchiguan (province of San Marcos) the main struggle of the Citizen‘s Council was to obtain regular ambulance services and they had been successful in doing so. The members of the citizen‘s councils also conducted regular facility surveys at the hospitals through which they identified gaps in supplies and medicines and then pushed for adequate stocking and supplies.

The Citizen‘s Councils of Health were the key citizen‘s group with whom CEGSS worked to strengthen the work of social accountability around health. These councils are mandated by law and work as platforms that encourage citizen participation in governance. The membership of the citizen‘s council comprises of leaders from different villages and they are expected to function as watchdogs over the work of the municipality and the MSPAS, however in the case of health, the division of roles and responsibilities is not always very clear since the municipality is expected to contribute with resources to local social services and at the same time the MSPAS is responsible for maintaining the network of public health services. But in Tectitan (province of Huehuetenango) we found that the citizen‘s council had been successful in working with the Municipality to add more beds and equipment at the local hospital and in Ixchiguan to improve the hygiene in the local market place. In Tectitan the citizen‘s council had also started a programme to address malnutrition with the Municipality providing inputs for vegetable gardening. At Nebaj we learnt that the Citizen‘s Council had raised the issue of disrespectful treatment with the authorities at the municipal hospital. The Hospital Director had no hesitation in concurring that the issue of treating the local Ixil Maya respectfully was being discussed regularly during staff meetings and citizen‘s council noted that there had been an improvement over the last few months.

Dr Walter Flores, Director CEGSS explained that their approach to social accountability was based on the legal commitments of the Government of Guatemala to its citizens. They believed that it was possible to work together with local communities to collectively analyse and reflect upon their current situation of health needs and existing gaps to develop a critical consciousness on health eq u ity an d r igh ts . Th is consciousness of rights then becomes the basis for examining the existing health policies and provisions and for collective demands for reform and change. Dr Ismael Gomez, Field Director of CEGSS explained that they had four steps in their approach. First they approached communities to assess the status of their mobilisation. They conducted a rapid assessment of existing community council and their leadership. If they found that leadership was committed, legitimate and representative, they moved into their second step which comprised of capacity building of the members of the citizen‘s council. In those cases that community councils have limited capacities for mobilisation or representation, CEGSS would support an initial community organisation strengthening through supporting community assemblies that would expand the number of community leaders in the council and its representation.

The capacity building process extended over six to nine months and comprised of a once-a-month interactive session discussing issues like legal and policy framework, participatory planning, monitoring of public policy, tools and methods and so on. Capacity building is based on popular education and other critical pedagogy approaches. In the third step the citizen‘s councils actually engaged in a process of vigilance through in-depth data collection at the family level and by conducting health facility surveys. In the fourth and final step the citizen‘s councils engaged in a process of strategic advocacy using different tools like media advocacy, lobbying and negotiation, public demonstrations and so on. CEGSS was currently working with citizen‘s councils in 15 municipalities in the more remote regions of the country, and we met with four of these groups.

They believed that it was possible to work together with local communities to collectively analyses and reflect upon their current situation of health needs and existing gaps to develop a critical consciousness on health equity and rights. This consciousness of rights then becomes the basis for examining the existing health policies and provisions and for collective demands for reform and change.