Role of Africa Health Budget Network
The Africa Health Budget Network (AHBN) is a group of African and global organisations and individuals using budget advocacy as a tool to improve health service delivery in Africa. AHBN concentrates on three strands of work: connecting members to formal training opportunities, events and tools; promoting learning and sharing within the network and applying coordinated and focused pressure on African leaders on their health financing commitments.

Need to Revise Health Budgets in Africa
Accessing acceptable, high quality healthcare is a fundamental right of every human being.1        Although Sub-Saharan African countries have succeeded in decreasing the ratio of maternal mortality by 49 percent between 1990 to 2013, 179,000 women still die due to pregnancy and childbirth related causes every year, largely due to lack of access to quality care. 2

Adequate investment in health systems, including health workers, drugs and infrastructure could stop these preventable deaths and bring         economic and social benefits worth nine times as much required3. Despite this evidence, less than half of African Union governments currently spend  $54 per person on health, which is the minimum requirement to cover basic health services.4            Accelerating the coverage of RMNCH (Reproductive, Maternal, Neonatal and Child Health) interventions at a rate to match that of the best performing countries in Africa would         imply spending only $9.05 more per person per year, on average.5

While many service delivery and health financing commitments have been made in the context of the Global Strategy for Women and Children’s Health, and there are other regional initiatives (see Table), few of these commitments have been met. Ensuring that commitments made by African Governments are delivered and implemented,   requires a concerted focus on accountability. Budget advocacy is a useful tool to strengthen accountability as it enables those outside (or even within) government to measure the amount of resources allocated to and spent on particular commitments.

Activists Demand Accountability in Health
Civil society organisations in Africa are calling for greater accountability and transparency from their leaders on the use of public funds for the survival of mothers and babies. At a World Health Organisation (WHO) international conference held in  Johannesburg on July 1, activists of the Partner’s Forum pressurised senior government officials from across the continent on the issue.

This call to action marks the launch of an African-led network demanding better use of   existing funds for women and children’s health as well as a greater allocation in national budgets for mothers and babies’ survival.

The AHBN believes it needs to get specific about the promises made on these issues, and to track whether these promises have been kept. Its first priority, however, is to make sure African Governments are transparent about what they spend on health. While most governments arecommitted to improve healthcare, like through greater spending, however it is difficult to check whether the promises are being kept if the budget is not publicly available or if the information in the budget is not clearly presented.

The AHBN has compiled a scorecard6 on the level of openness by governments on their health spending. Out of 26 African countries profiled, only one i.e.  South Africa scores as being sufficiently transparent. Dr Aminu Magashi Garbain,  pra Nigeria jjkj  a practitioner said, "African activists are now  using the  internet and social media to discover more about their    government's priorities. We note that our governments are shy about sharing public expenditure on health. We want to know more. This matters to the women and children of my country, Nigeria. At an international conference in  Johannesburg we will be calling for greater transparency in health spending and demand increased expenditure on the health of women and children which is critical to Africa's   progress."

Dr Mohamed Yilla, Country Director for the Mamaye Campaign in Sierra Leone added, “Countries like ours with poor survival rates for mothers and babies are also often plagued with under-investment in the health sector. For a couple of years now civil society organisations in Sierra Leone have been advocating for increased and more transparent health financing. This has led to an increase in the health budget. It is vital they continue to pressure the government to meet its commitments. The   African network will help us share our experiences and the lessons learnt to improve our advocacy.”
Table : Budgetary allocations in various commitments to improve women and children’s health in Africa 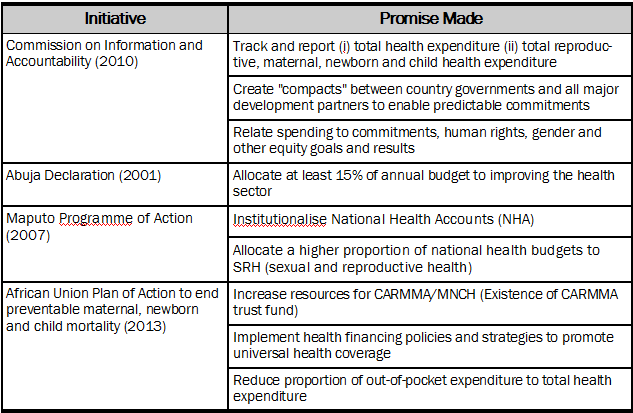 Dr Aminu Magashi Garba is a medical graduate and holds a masters degree in Public Health from the London School of Hygiene and Tropical Medicine. He was Executive Director of the Nigeria-based NGO Community Health and Research Initiative from April 2002 to December 2009.

He currently works with a DFID-funded project “Evidence for Action in Nigeria on Maternal and Newborn Health” and also coordinates a national coalition of civil society organisations and media, 'Accountability for MNCH in Nigeria,' that strives to promote accountability and transparency in improving services via advocacy, use of annual scorecards for MNCH and budget-tracking. He is also the regional lead of the Africa Health Advocacy Network (AHBN) comprising committed individuals, media and organisations in Africa, which promotes health budget accountability, participation and transparency.

To know more about the work done by AHBN , please CLICK HERE.