The Universal Declaration of Human Rights and its ensuing instruments     envisaged a balance between the rights of the people vis-a-vis the state through the framework of the International     Human Rights Law. However, pursuant to the neo-liberal economic policies,  private business corporations particularly the transnational corporations (TNCs) have emerged as major players in the abuse of human rights in their pursuit of      relentless profiteering in a free market oriented global economic order.

In some countries the budgets of such business enterprises exceed the gross domestic product (GDP) of the country itself. In such skewed power relationship, number of policy changes in sectors such  as health care have been effected in favour of such private players.  Favourable policies or lack of regulatory policies have  promoted their unregulated access to natural resources and their  control over basic services hitherto catered to by the state as its constitutional duty. Thus, education, nutrition and water, for      instance, are turning into market       commodities from being essential     entitlements of citizens. The refusal of these corporations to be governed by any law illustrates their power, clout and non-accountability to any government, Constitution or people.

Through the pro-market policies and  governmental backing, major global   financial institutions have largely       redefined health as a private good from being a public good. Health and healthcare are being increasingly commodified as market goods. This ‘corporatisation’ and ‘marketisation’ of health care is pursued by pharmaceutical, diagnostic, medical equipment and health infrastructure   industries. Medical education sector too has attained the character of a private commodity. Needless to say that such an approach has infiltrated the health policies of many nations, resulting in huge malpractices and corruption, as well as human rights violations.1 The increasing murderous attacks on human rights defenders across the globe, intimidation and threats targeting of whistleblowers, illustrate the  violence and human rights violations unleashed on communities who resist.

The Human Rights Council has taken note of such arm-twisting tactics by these   powerful entities. The United Nations (UN) working group on Human Rights and Business has  repeatedly stressed the need for accountability of business enterprises, particularly of TNCs.2 In this backdrop the report submitted to the Human Rights Council (HRC) in its 26th session by  the ‘Working Group on the issue of human rights and transnational corporations and other business enterprises’ is a significant development. Subsequent to this report a resolution has been passed, on the ‘elaboration of an international legally binding instrument on transnational corporations and other business enterprises with respect to human rights.’ It offers a ray of hope in making corporations accountable in the future.  Drafted by Ecuador and South Africa and signed also by Bolivia, Cuba and Venezuela, the resolution has been adopted with 20 votes in favour, 14 votes against and 13 abstentions3. Despite US’s threat to withdraw all its investments in Africa and despite strong opposition from the EU and its tactical tricks, a majority of the member states independently expressed their will to see TNCs made liable for violating human rights. The resolution states its decision to establish an open-ended intergovernmental working group for a legally binding instrument on TNCs and other business enterprises with regard to human rights. The chairperson has been authorised to draft such an instrument.

This is a clear step forward towards making corporations accept human rights framework and to ensure their accountability. However, it is likely to be a long drawn struggle to achieve the realisation of a legally binding treaty in the matter. There needs to be a persistent engagement from civil society to press for the rights of human rights defenders, fix accountability for human rights abuses by business entities and defend right to dignity and well being of the most vulnerable populations.
​¹David Berger, Corruption Ruins the Doctor-Patient Relationship in India, BMJ2014;348: g3169doi:10.1136/bmj.g3169(Published8May2014)
2http://www.ohchr.org/EN/NewsEvents/Pages/CorporationsMustBeHeldAccountableForHRViolations.aspx (accessed 5 July, 2014)
2 United Nations General Assembly - Human Rights Council http://ap.ohchr.org/documents/dpage_e.aspx?si=A/HRC/26/L.22/Rev.1 (accessed: July 10,  2014) 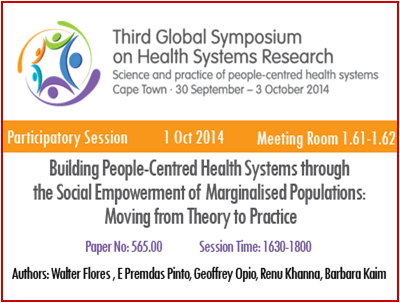 E. Premdas Pinto works as the Advocacy and Research Director at Centre for Health and Social   Justice (CHSJ), India. He is facilitating the thematic area of community action for health rights with a  special focus on processes of community monitoring and accountability in health.

To know more about the work done by CHSJ, please CLICK HERE